It was my birthday but that’s only relevant, because it’s one reason I was in a very relaxed mood and perhaps therefore more open to noticing than usual. That and the radically improved weather.

In Amsterdam we have a lot of canals. Everyone knows that from the picture postcards but probably not that, outside of the old centre, some of them are used by some substantial ships. Not exactly ocean liners – those only come into the harbour from the North sea – but the long, low freighters (we might call them barges) that carry goods across large parts of Europe, over rivers and canals, through systems of locks and lifts, which are themselves marvels of engineering. When one of these ships comes down a canal, all the bridges go up to let them through. Major roads though the city come for a few minutes to a standstill. Tramlines and cables go up in the air. The world stops to take a breather. Everyone is used to it. It’s normal. Sometimes the timing is bad for you but it’s part of living here.

I was on my way home from a short run, thinking of an extra loop and then the bridge went up, so that was that. Why I decided to stop and see what was going to go through, I don’t know. Like I said, it’s a pretty regular event. Anyway I crossed over to the quay and this thing was huge. So I stood there in the sun and watched it go slowly but confidently through with less than a meter clearance on both sides. I was full of wonderment for the skill of the steersman but also for this huge craft itself, for the open bridge and the mechanism that drives it, for the people calmly waiting (and some of them, like me, actively watching), for the whole human/mechanical system that makes this possible, acceptable, normal, part of being in Amsterdam. Essentially this has been going on for centuries and somehow it has survived into a modern world of speed and impatience. An anachronism that isn’t, because it’s outside of time. It just is how things are and it brings a value very few would wish to sacrifice to “progress”. And it made me think of Jane Bennett’s wonderful The Enchantment of Modern Life and how there is so much that is enchanting in the world and that if we open our eyes to it we see how much there is to value and preserve. 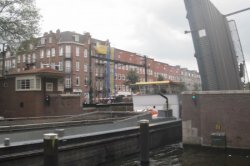 Running on through streets I have walked, run, cycled and driven along hundreds of times, I seemed to notice all kinds of things I hadn’t really seen before. Or rather I had seen but not appreciated them in the same way. People’s little pavement gardens, a few plants lovingly tended. Something to make the world brighter, more enchanted. Something to value and to want to preserve. I saw a cyclist coming the wrong way down the cycle path. Often this irritates me. Today I saw how he slowed, moved briefly onto the pavement to let three tourists on bikes (going the right way) pass and then moved back onto the cycle path and somehow this seemed a very human gesture, an acknowledgement of other people and their right to be in the world, something that is too often missing, something else to value, to wonder at and to preserve.

I saw a poster “www.comefishingintheamsterdamcanals.nl” (but in Dutch, you understand). There’s all whole site that tells you what you can catch, what’s good to eat and what’s safe to eat. I suspect most people have no idea they could get their food out of the local water.

What can this mean for sustainability and for a movement for change to achieve that? I have my own thoughts on that but will leave it as a question.