“There’s something happening here. What it is ain’t exactly clear” (Stephen Stills 1966)

We live in a world where the rate of change, the sources of change and the potential impact of change is greater than it ever was before. Strategic decisions have to be taken in the face of a considerable degree of uncertainty, so we have to learn the art of building the management of uncertainty into our strategies.

Learning this art is essential for all types of organization, large or small, public or private.

There are two sides to this art. The first is understanding what’s going on in the world around us with all its uncertainties. The second is developing the strategies to deal with continued uncertainty. Fortunately a number of smart but insufficiently recognized people have come up with good ideas to help us with this. In the course of a series of blogs I’ll introduce these ideas and look at how they relate to each other and can be used as a whole or in parts – as a sort of toolset. We have to understand, however, that a toolset doesn’t itself provide us with “the answer”, because such a thing doesn’t exist. 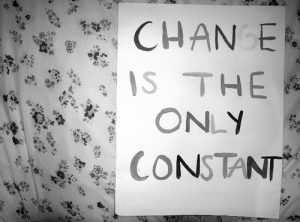 Both “problem” and “solution” are constantly in change and every action we ourselves take initiates further change. So there is a continuous process. A toolset can help us in this process and, if we understand the rationale of the various ideas in it, give us the mechanisms to proceed sensibly.

I’ve talked above about “uncertainty” but does that one word capture the whole extent of “rate, sources and potential impact of change”? It would be nice to have a word that somehow captured all that. Finding the right words to capture concepts is always a problem.

My friend Ross Button has an idea he calls Scatter architecture. That’s one of the ideas I’ll talk about later. Right now I’m borrowing the term Scatter, if only because it’s less overloaded than most of the other analogies or parallels I’ve come up with. It’s more than just a metaphor. In a very real way all that change and uncertainty results in a seemingly scattered and random environment, which is both hard to understand and hard to resolve.

But Scatter is not just something we’re on the receiving end of. Scattering can be a matter of choice. Scattering as a response to Scatter. We scatter seeds, because we know there’s all kinds of reasons that planting them in one spot or one line may not result in sufficient crops.

The same is true on a much larger scale.

The Navajo people of America, for example, choose (when left to their own devices) to live in widely scattered groups. Actually a group consists usually of a single homestead.

The totality of these groups is an ecosystem (the Navajo Nation), where most of the participants don’t know and may not even be aware of most of the other participants – as individuals. They’ve developed a whole way of life, which is not merely an adaptation to these circumstances (the ecosystem) but is designed to support their continued existence. It’s part of their identity and it’s a mechanism to ensure that actions in one part of the Nation don’t have unwanted consequences in another part.

Farming communities in many parts of the world are also of necessity scattered. They may not always have the philosophy and the belief system of the Navajo to support this. It may be purely an adaptation to economic or agricultural constraints. Whatever the reason, these communities also develop ways to collectively ensure the success of all the individuals. These may be conscious collaborations in the form of cooperatives or they may be simply a learned way of coexisting. Whichever it is, they are mechanisms that have developed through an understanding of the working of their scattered ecosystem and a consciousness of their exposure to the uncertainty inherent in such a system. These mechanisms serve to limit the exposure of a single participant to a catastrophic event. They minimize single points of failure and distribute repeatable “solutions” to the maximum extent possible in the geography of their ecosystem.

I believe this is both possible and desirable for modern enterprises but there’s certainly a lot of work involved in getting there.

Enterprises have traditionally been much more self contained. An effective (viable) enterprise could exercise considerable control over its own situation. Market or political conditions were clearly outside its control but those were (and are still) external conditions – like the weather. Sheer scale made it possible for a viable enterprise to weather the storms on its own. The information technology used by these organizations was also under its own control and management and was anyway primarily used in support of the business rather than as an explicit element of its identity. Governance over all these aspects was not necessarily easy but at least the scope of what had to be governed was manageable.

“Everybody look what’s going down”

In reality the world of business, government and public organizations is now also scattered and the level of scatter is only increasing. Most organizations are part of a value network in which key activities are performed by partners. Those partners are in turn part of other value networks and so all of the players are increasingly both interdependent and exposed to unexpected events outside of their own direct control (or even sometimes visibility). The value network may consist of business process partners, cloud computing providers and consumers or the broader world of social business. These organizations need, just like those scattered farmers, to find new ways of managing their business in these situations.

So what is going down? Well, with apologies to Stephen Stills, there’s a bunch of people on the street, some of whom have some idea what needs to change and why and some of whom are just carrying signs saying hooray for our sign. And then there’s a bunch of vested interests who have no desire to change and still have a lot of power. Step out of line, the man comes and takes you away. But some of the vested interests are figuring out that maybe they don’t have so much to lose. And there is an increasing number of people inside those vested interests, who are already working to change things. So this site is going to be about providing those organizations and individuals with that toolkit I spoke about.

And maybe, just maybe that will turn out to be my small contribution to making and sustaining the change.