Let’s be clear. Sustainability is about a lot more than just environmental policy. Making our footprint on the planet bearable (for the planet) will only succeed on the basis of social equity and economic viability. 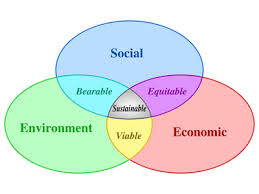 And not everyone is delighted about that.

All Your Natural Resources Are Belong To Us

A few weeks ago I happened to turn on the radio during an interview with a member of the European Parliament. She was talking about the division of the spoils after the recent elections – in terms of power and influence. The EP is all about Committees, so the trick is to get yourself on the right Committees, the ones that determine effective policy – and those are not always what you might expect. I learned that, if you want to have an influence on environmental issues in the new parliament, the Environment Committee is not the place to be. The real debates that will determine the effective environmental policy of the EU in the coming years will happen in the Energy and International Trade committees.

Now the relationship of the Energy market to the environment is probably obvious but International Trade is less so – unless you happen to know about the Transatlantic Trade and Investment Partnership (TTIP), which I did, because a couple of weeks before that I happened to read a tweet from the Pirate Party.

The TTIP and similar agreements being negotiated (largely in secret) around the world might sound innocuous but these agreements will make it effectively impossible to implement policy for environmental, economic or social sustainability. If such policy can in any way be construed as interfering with the trading activities of multi-national corporations – including those that dominate agriculture, mining and exploration, media and industrial production – they can and most certainly will sue your country for millions of dollars. Please read about this yourself, for example here or here. This weekend I happened to get a mail from a friend in the UK pointing me at this campaign that’s trying to get a semblance of democracy into the process. If you happen to live in the UK, you might want to check it out.

A few weeks ago, at an African music festival I attend every year, I happened to spot a professor of business ethics boogieing on down among the crowd. I recognized him because earlier that week I attended a debate organized by the Club of Rome (Netherlands) at which he was one of the panelists. The debate was about a draft document called Social Preconditions for a Sustainable Economy. I happened to hear about the debate from someone who happened to attend another event, organized by my own direct network, around circular economy and organizational change. A week later, at a street party, I happened to discovered that a neighbour I regularly say hello to is a journalist actively promoting circular economy.

Serendipity and The Power of Networks

Many great discoveries are made by accident. You just need an open mind and the ability to reason about things. Horace Walpole called this Serendipity, inspired by a Persian tale of The Three Princes of Serendip who “were always making discoveries, by accidents and sagacity, of things they were not in quest of”. Two things are important here: discovering things by accident and having the “sagacity” to see their importance – in particular the connections between isolated phenomena. So it’s not simply coincidence but it’s certainly not fate/destiny. It’s that peculiarly human ability (if one’s mind is open enough) to look beyond the obvious and discover things you weren’t looking for.

The serendipity in the stories above is not the set of coincidences involved but that these coincidences create links between pieces of information and between networks of people with different focus areas and create the chance to bring those topics into discussion in other networks. And it’s where all these things come together that real sustainability is developed.

As we work to promote sustainability, there will be enough vested interests that have very strong reasons to try to undermine that. They have lawyers, guns and money. The formal and informal networks that we have are our weapons against that power. That may not sound like much “firepower” but it really is. If 5 new people, who know each other because of a love for African music, are now aware of circular economy and can take that back to their daily lives; if they are informed about TTIP and can share that in their other networks; if people already busy with sustainability discover African music or anything else that increases respect for and love of other cultures (having fun is important too); and if all that radiates out into still wider networks, then the reach of our ideas will increase geometrically. And at a certain point there will be enough of us actually creating the new reality that those vested interests will either discover they have real interest in that new reality or will simply become irrelevant.

So embrace serendipity. Be open for things that weren’t what you were looking for. Put yourself in contexts where that can happen. Connect the ideas and connect the people. That’s how we’re going to effect a real change in our world.