Here we go with the third (and last) blog in this series which looks at some underlying theory about organization and management.

In the social business context I consider the most significant approach to be Stafford Beer’s Viable Systems Model (VSM). The VSM has two central concepts. The first is feedback, which enables an organization to constantly learn and adjust to experience and to new variables in its environment. The second central concept is the fractal organizational pattern. 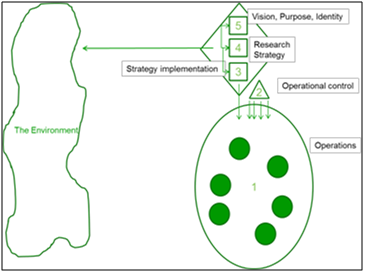 Beer postulates that a healthy (viable) organization should look like this:

What the organization actually does (core business) is referred to as the Operations of the organization. Vision, Strategy and Implementation (including monitoring of results and potential subsequent adaptation of processes) are management activities. Between Management and Operations is the coordination function, ensuring synergy and effectiveness in day to day operations.

Feedback is fundamental to the relationship between the three management components and between them and Operations.

External to the organization is its Environment – all the things that go on outside of its control but which can have a direct or indirect impact on the successful functioning of the organization. It’s primarily the strategy component of management which is responsible for keeping an eye on and interacting with the environment. 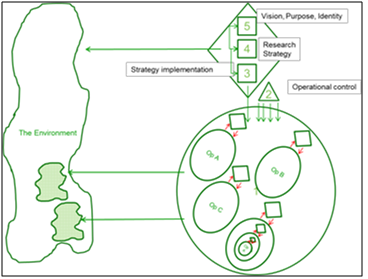 Each operation must itself mirror the overall structure, in order to take maximum advantage of the knowledge and capabilities of the people involved in that operation and in order to satisfy Ashby’s law.

In any reasonably complex organization the top level operations are themselves quite complex, so unsurprisingly we find further fractal levels within those (the Russian doll effect).

The whole thing is fractal- right down to the interaction with the environment. Each operation will be concerned with particular parts of the overall environment, whose effects can be relevant to it.

The result is an organization in which each operation is optimally performed in line with the overall vision, strategy and goals of the organization. It’s not a panacea. None of this works automatically just because you create a structure that looks like the VSM. It has to be lived and kept healthy. Patrick Hoverstadt provides lots of excellent war stories in The Fractal Organization, which help us understand why the mechanisms in the VSM are necessary and also the difference between living them and paying lip service to them is so important.

One thing the VSM doesn’t address is networking across fractal units and across organizations. That’s not exactly surprising. A network is not a model of how an organization manages itself. More to the point this kind of network has only really achieved significant scale with the development of “social” technology. But the existence of these networks does change how an organization and its enterprise works. You can’t plan networks or force fit them into any pattern. You can’t constrain a network to be purely within your own organization – at least not if you want to get any value from it. Networks involve customers/citizens and partners. In fact every participant in a network is a partner – not in some corny marketing sense but in the reality of the exchanges in the network. Networks support communication across channels you didn’t predict in advance. They cross any organizational unit you might have defined – even following the VSM. For all these reasons networks are great sources of innovation – and that innovation is emergent. 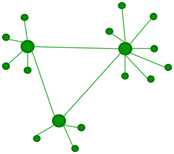 What you can do is to encourage and facilitate their development and monitor the patterns that develop in order to detect hot spots or concentrations – usually referred to as nodes. These nodes help you understand where are how interaction is taking place, which groups communicate most actively with which and also where there are blank spaces. Blank spaces may mean you need to stimulate those areas more but they may mean these are areas in which you shouldn’t put too much effort.

The study of networks is not new but has developed very rapidly over the last few years, largely because of social networking. Unfortunately “network” is a very overloaded word, so the terminology is a bit confusing. If you want to read more about this I suggest you start with the work of Verna Allee. Apart from her own work, she’s a great source of reference to other people’s. 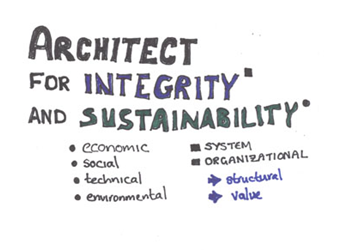 I started this series of posts by suggesting that could be several reasons to consider adopting a social business model. At this point of conclusion I would argue that this new model should be consider if:

I can’t prove any of this and I’m not for a moment suggesting that the new model is guaranteed to succeed. I do think I’ve shown that there is a lot more to it than woolly headed idealism but I have no problem saying that without idealism and commitment, nothing of value is ever achieved. So let’s hear it for the crazy ones. Or as the Situationists used to say: Be reasonable, demand the impossible!

[1] Fractals, for those who don’t know, are patterns that repeat themselves at different levels of granularity within an object (e.g. a set of Russian dolls or the cover of Pink Floyd’s Ummagumma), a system or an organization,