In my last article, ‘Love in the Time of Cholera: How to do Business in a Recession‘, I sketched out what being a social business is about and made the claim that making the change to such a model might be a reasonable response to the current state of the world.

Social business can sound pretty idealistic and in a sense it is (there’s nothing wrong with having some ideals).

There are, however, some pretty solid underpinnings for why an organization might want to become a social business. Let’s start with some drivers.

For some 150 years the primary form of economic production (the motor of our economy) in the “developed world” has been industrial – the mass production of goods.

If it wasn’t obvious before the crisis, it should be obvious now that we in the west are living in a post-industrial age.

The classic operational model for industrial production is so-called scientific management or Taylorism (after Frederic Taylor who developed and popularized it in the early years of the last century). This model is posited on the assumption that the tasks performed in the actual operations of manufacturing are essentially repeatable, very fine grained and not amenable to any form of inventiveness or creativity on the part of the “shop floor” worker. The scientific manager has determined the optimal series of actions required to produce a particular good and any divergence from this will undermine the whole process. Despite various modifications, fads and trends nothing has substantially changed (no one’s going to tell me the ideas of Deming and other TQM founders have ever been implemented as intended). 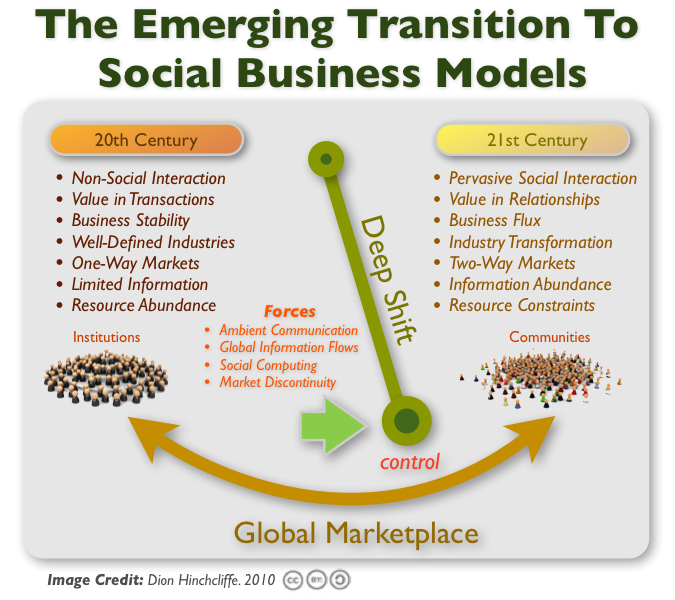 If it wasn’t obvious before the crisis, it should be obvious now that we in the west are living in a post-industrial age. That doesn’t mean that mass production will ever disappear but that it has lost its dominant role as the motor of the economy – forever. It’s arguable that this will pretty soon be the case too in the “new” economies. So it’s not unreasonable to think that a different management model would be worth considering. In fact it would be totally unreasonable not to consider that.

Another driver is the simple question as to whether Taylorism has ever been appropriate beyond the very simple types of operation it was designed to address. There’s an excellent exposition of this whole theme in Patrick Hoverstadt’s The Fractal Organization, a management theorist of some repute and in no sense a woolly headed idealist.

Part of his argumentation is based on Ashby’s Law Of Requisite Variety, which says quite simply that “only variety can absorb variety”, which means that any viable operational model has to contain sufficient variation to deal with the amount of variation in its environment. As Hoverstadt says “arguing with Ashby’s law is just about as futile and doomed as arguing with the law of gravity”. And you can’t manage a large amount of variety with hierarchical systems. A small, elite management team can’t deal with all that variation. If you make use of the creativity and on the job skills of the people doing the work, you can.

The third driver is technology. Social media and ubiquitous connectivity are not merely enablers for social business but are transforming the way we work to such a degree that older organizational forms will become harder to sustain or, if sustained, comparatively much less effective. People’s expectations and in particular those of new entrants to the workforce are changing. Good people will go where they fit best.

Even those few drivers for change ought to be a basis for questioning our older models. In my next article I will move on to the Stafford Beer’s Viable Systems Model and current thinking around networked organizations. In the meantime check out the examples of successful (if partial) social business adoption by leading businesses in this McKinsey report: And for avid readers, I can recommend the following too: